Everything You Should Know About Preeclampsia and Pregnancy
8 tips to keep your back healthy
9 Healthy Habits to Start Saving Money and...
Femto LASIK – 8 Important Facts You Need...
Calcium—How much you need, sources, supplements and other...
What Is A Vaginal Yeast Infection? Causes, Symptoms,...
What Is Bulimia Nervosa? Basic Facts About This...
Women’s Health and Stroke—5 Vital Facts You Must...
How to stay healthy while traveling (16 tips...
Diet and Mental Health – You can improve...
Home Your medical guide Vitamin A – Facts
Your medical guide

Did you know Vitamin A was given the first letter of the alphabet because it was the first vitamin to be discovered?

Vitamin A benefits our body in many ways:

Vitamin A is not only absorbed directly but it is also created by the body by converting beta carotene into vitamin A.

Sources of Vitamin A are:  eggs, milk, liver and meat. Beta carotene that the body can convert into vitamin A is found in many fruits and vegetables, especially the red, orange and green coloured ones.

You must have been told several times that eating lots of carrots helps you to see in the dark. This is thanks to the Vitamin A that is produced from the high levels of beta carotene found in the vegetables.

Other foods which have high levels of beta carotene that can be converted to vitamin A include tomatoes and dark green leafy vegetables, such as spinach. Beta carotene is not only used to form vitamin A, but it is also a powerful antioxidant in itself. None of the beta carotene that is absorbed is wasted as any excess after conversion to vitamin A has taken place is used to fight the harmful free radicals within the body.

Vitamin A also helps fight infections and illnesses by helping tissues that line various parts of the body, including the eyes, mouth, nose, throat and lungs, to grow and also to repair them if they are damaged to prevent infection. Children also need plenty of vitamin A to help their bones and teeth to develop properly. 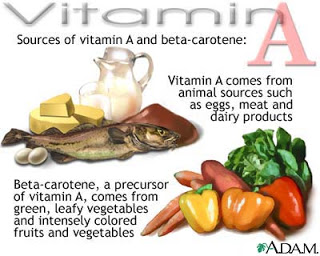 Thank you for subscribing!
Have a question? Please email me at vidzword at gmail dot com
Stay healthy!
Vidya Sury
Vitamin A – Facts was last modified: January 2nd, 2013 by Vidya Sury

Do you suffer from constipation?

The truth about running shoes

If you have diabetes, you can’t eat sweets, right?

Aging – What to expect as you grow older – 5

Are you losing hair?